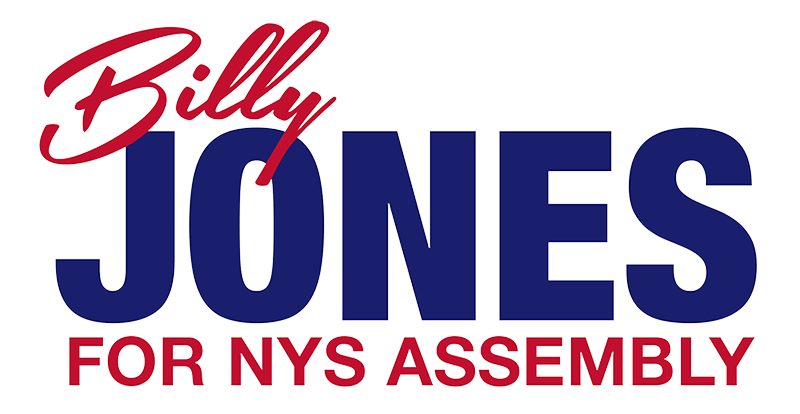 Assemblyman Billy Jones was elected to the Assembly in 2016 to represent the 115th District, comprised of Clinton and Franklin counties, as well as several towns in St. Lawrence County.

After graduating high school, Assemblyman Jones ran his family’s dairy farm and has worked as a correction officer with the New York State Department of Corrections from 1996 to 2016. He served as mayor of Chateaugay from 2009 to 2013 and as a Franklin County legislator starting from 2010 to 2016, becoming chairman in 2013. During his tenure, Billy successfully reformed ethics laws to make government more transparent.

Assemblyman Jones is active with various organizations throughout the North Country,  including the Chateaugay Rotary Club and is a board member of the United Way of the Adirondack Region. He was a member of the North Country Economic Development Council, where he supported numerous projects that helped local businesses grow the region’s economy. Assemblyman Jones remains very engaged with issues facing the Canada-U.S. border and was named the honorary Co-Chair of the Quebec-New York Corridor Coalition, as well as his recent appointment as the Co-chair Council of State Government East’s Canada-U.S. Committee.

During his tenure as an Assemblyman he has introduced and passed multiple pieces of legislation that will benefit the North Country. In fact, he passed the most legislation of any freshman Assemblyman in his first year in office. He championed legislation enacted into law that created an advisory council advocating for individuals suffering from PANS, created the rural health council, and local wins such as naming the Gordie Little bridge and designating several rivers as inland waterways, making surrounding communities eligible for more funding. He has also secured millions of dollars in state funding for programs like Older Adults Technology, Inc. (OATS), North Country Chamber of Commerce, Northern New York Agricultural Development Program, and North Country Veterans Association.  He continues to prioritize having affordable, reliable and accessible broadband internet and cell phone coverage throughout the North Country. He also strives to find ways to help small businesses succeed while simultaneously finding ways to relieve tax burdens on the hardworking men and women of the North Country. He will continue to support our educators to ensure they have the resources they need to help our children thrive and also make sure our veterans, who have bravely served our country, receive the benefits they have earned.

Above all, Assemblyman Billy Jones is the proud father of a daughter, Ella Liberty Jones, born on July 4th.